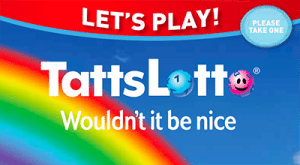 Accidents rarely pay off, but one lucky man’s TattsLotto mistake has earned him over $2.6 million.

A Victorian man purchased his TattsLotto entry using his favourite numbers in last Saturday’s $3.9 million draw, but he had accidentally played the same numbers twice.

When he logged onto his Tatts account to check his numbers, he could only comprehend winning once – with the Division one prize paying a cool $1.3 million.

“At first I thought ‘wow I’ve won $1.3 million’ so at first I was lying in bed shaking,” he told Tatts.com.

“But then after an hour or so I realised I hadn’t checked the rest of my tickets so I looked at the next one and to my surprise I found that I’d played the same game twice.”

The man who is in his 30’s pocketed a total of $2,618,694.18 in prize money over the separate wins. He revealed plans to buy a home and a Ferrari, as well as take some time off work to see the Seven Wonders of the World.

The accidental purchase isn’t the first time it’s happened either, with a woman in Melbourne winning two Division one prizes worth over $400,000 each back in 2013. She had purchased seperate tickets at two different news agencies.

The third Division one prize was won by an anonymous punter who purchased the ticket in Western Australia.

The weekend’s two winners takes the total number of Lotto’s division one winners to 247 for this financial year, including 100 won by Tatts customers.