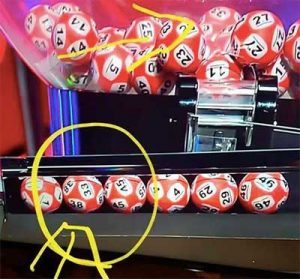 Ireland’s Lotto Plus 1 draw, which you can bet on at CrownLotto or Lottoland with the jackpot at more than $AUD8 million this week, took place on Saturday night with zero Division 1 winners.

However, a picture posted on Facebook following the draw appears to show a winning ball with the two different numbers, 38 and 33.

Irish broadcaster, RTE, broadcast the footage, which shows the 38 ball rolling into view. But it looks as though the 38 number has a 33 on one side as the next two numbers are drawn.

While social media users quickly shared the footage, a spokeswoman for the Irish National Lottery explained that it is an optical illusion.

“The National Lottery would like to assure its players of the integrity of Saturday night’s Lotto Plus 1 draw,” the spokesperson said.

“A brief reflection of light during filming caused an illusion and some players to think there were two numbers on ball 38.

“This was not the case. The weight and size of all Lotto balls, and the numbers, are strictly checked in advance of each draw.”

The spokesperson added that the draw is regulated and observed by third parties, including auditors KPMG.

While some social media users did point out it could be the lighting, others didn’t buy the explanation and branded the game a “fix”.

“It’s the light reflecting on the 38 to make it look like 33…if you look at the last ball in the roll you can see the same light on the 46,” one Facebook user countered.

“Looks like an 8 to me but a bit has faded or light shining on it just like the 4 in the 45 beside it,” another user wrote.

You can look at the photo below and decide for yourself whether the number had both 38 and 33 on it. However, it is likely that the studio lighting played a trick on viewers since the lottery is governed by an independent party.

Additionally, if you want to participate in these international lottery draws from Down Under you can head to CrownLotto and place your bets on the outcome. You are not buying tickets into the official draw – instead, you are placing a wager on the outcome.

You will need a CrownLotto account – if you have a CrownBet account use your login details or sign up by following our links. Then head to the lottery section by clicking on ‘Lotto’ in the menu panel. Then click on the Irish Lotto option under the ‘All Lotteries’ tab to bet on this week’s draw.

Lottoland, and its official lottery betting partner Planet Lottery, also give Australians the chance to bet on Ireland’s Lotto Plus 1 draw.

Pick your numbers, as you would when buying a ticket into the official draw, for the $AUD8 million Irish draw this week and confirm the transaction.

You can bet on the outcome of multiple international and Australian lotteries too, so be sure to check what else is on offer.

Check out our lottery betting reviews to see which site you prefer to use for online lotto play.