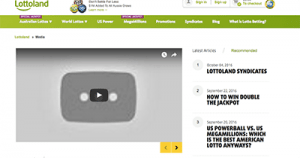 Lottoland is on the chopping block again for an ad allegedly portraying excessive gambling.

The ad, targeted by the Advertising Standards Board (ABS), shows a man who is under a table gambling on the Lottoland app, unwilling to hand over his phone.

The ABS said it was one of three ads by the lottery company which received complaints, but this ad is the only one to be removed.

The regulatory body said the ad encourages problem gamblers to hide their addiction from family.

One complaint detailed that while the intention to be light-hearted didn’t go unnoticed, when it comes to young children the ad “promotes the normalisation of gambling in the family home and the fact that it is so easy to do.”

“The ads that I have the most issue with are encouraging hiding the fact that the person has a gambling addiction,” the person said.

“Hiding the gambling from family and blatantly lying about it.”

The ABS acted on this complaint specifically due to the secretive nature depicting “excessive participation” in gambling activities.

Lottoland defended its advertising campaign claiming the ads were a play on how people used their smartphones.

“The ASB Case Managers have given us seven days to provide a comprehensive response off the back of that,” Lottoland said.

“I find the process adopted in our case to be both extraordinary and unfair.”

While Lottoland said it did not accept the ASB’s ruling, it has agreed to change the ad “out of respect for the process”, but in doing so requested the ad not be used as an example to others.

This is the first time an advertiser has warned the ASB to leave out advertisements when highlighting breaches.

“Finally, we do not agree to a licence to the ASB to copy, reproduce or use our advertisements for the purpose of achieving the objects of the ASB or any other purpose,” Lottoland said.

The other two ads which also received complaints were cleared by ASB despite a similar concept being portrayed – one involved a grandma pretending to take a family picture but instead she is using the Lottoland app.

“The board noted that unlike in the first two versions of the advertisement where the grandmother is still shown to interact and engage with her family, in this version of the advertisement the person using the product has isolated himself from the family and considered that this is a depiction of a person who allows wagering to become a priority in their life,” the ASB said.

Read our review of Lottoland.com or sign up here